I talked to famed sportswriter Bob Dutton about Chris Getz and he agrees, “I always thought Getz got hammered by the public more than he deserved. When healthy, he was a solid defensive player with above-average speed and a light bat. At one point, that was OK for a middle infielder.” See? OK. All we really want in life is to be OK. 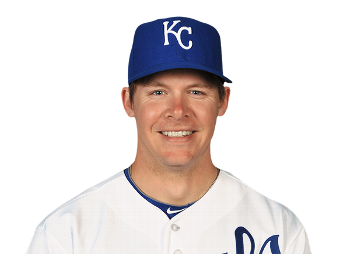 Just look at that face.

You ever hear of Maslow’s heirarchy of needs? The first is shelter, then food, then water, then just to be OK. After that comes love and wealth and hookers and blow, or something. But really, all you ever want to get to is OK. You WANT to be Chris Getz. Chris Getz is your center, your chi, your zen.

But, for some reason, Chris Getz ranks up there with names that generate a gag reflex among Kansas Citians like Yuni, or Omar, or Lin Elliott, or Kardashian. Chris Getz, apparently, was to be the second coming of Frank White at second base. But that’s silly to ever think that was going to happen. Chris Getz was being the best Chris Getz he could be. He went out there mostly every day and tried his ass off – when he wasn’t hurt.

Speaking of Chris Getz’s ass, we come to our provigil to buy 46th moment in the worst Royals moments of all time. The ass over teakettle slide by Chris Getz onÂ April 15, 2012 – a successful ass over teakettle slide, might I add, against the Indians in a 13-7 loss. This wasn’t Getz’s finest moment. No. But it is what we should strive as a human race for. To run swiftly. To slide hardly. To face plant into second base safely and heartily.

Besides, this was in the first inning. How was Chris Getz to know that Royals pitchers would give up four home runs to Indians hitters in the game? Would he have run so hard? Would you work as hard on your spreadsheets and TPS reports when you know Martha in accounting is going to just mail it in with her end of month financials? Fucking Martha. Pull it together. Come on.

No. You want to be like Chris Getz. Again, Bob Dutton says it best, “the Royals didnâ€™t help by portraying him as a gritty, smart player. Actually, I think he was those things, but so what? Thatâ€™s damning with faint praise, like saying: Heâ€™s a good guy or she has a nice personality.” Sometimes, that’s all you want. You don’t want the fella with the tattoos on the Harley. You don’t want the chick wearing six inch heels and a strapless dress. You want Chris Getz. Shelter. Food. Chris Getz. Sometimes it’s okay to settle.

You do you, Chris Getz. Your fly your ass into left field, buddy. You do your own Getzian yoga pose for those that love you… the ones reading that you are #46 on the worst Royals moments of all time.

Next up? #45. I guarantee you won’t want to change the channel.