Why. If the KC All-Star Game sucks, it’s our own fault

buy Pregabalin 300 mg uk It was one month ago today when, I felt, Kansas City Sports Radio had hit rock bottom. Â It had been a gradual, but steady decline. Shows added an extra ad spot or two at the top of the hour. Lineups shuffled, new talent was hired. Advertising segments became regular and recurring segments.

I found myself listening, as I dutifully did daily, to the 810 Sports lineup, occasionally flipping over to newcomer Danny Parkins and Nick Wright. Â I had had it. On June 7, I listened to Soren Petro circle jerk with his buddies for an entire hour while I pounded him on twitter about things that were more entertaining than Sports Radio. Immediately following, I listened to Kevin “Don’t call me Don Fortune” Kietzman try to sell me grills, cookies, soccer tickets and binoculars all without, it seemed, taking his first actual commercial break.

I had a moment of clarity that I was pissing away my time listening to garbage.

That night, after several drinks, I penned my Open Letter to Kevin outlining several specific instances where I felt the quality of his program was lacking.

I could not anticipate the shockwave it sent through local radio. 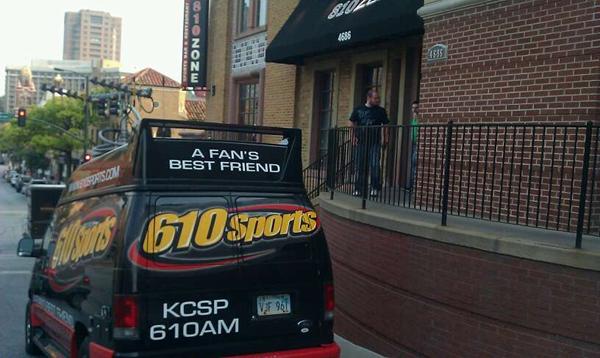 The Open Letter was picked up by several local blogs. It clearly struck a nerve with other listeners. It was also addressed personally by Mr. Kietzman, sort of. Within hours, the competition at 610 had caught wind of it and made an effort to capitalize.

Ratings came out days later showing aÂ seismicÂ shift in the ratings landscape in KC Sports Radio. And then the #RadioWars hashtag on Twitter began to chronicle sniping between the two stations. Â Even Jason Whitlock, the once (and future) King of Sports Media in Kansas City stuck his nose in from a NyQuil induced stupor in Los Angeles.

All of which begged the original mission statement of my Open Letter… produce less-shitty radio.

The original target of the letter was Kevin. Until today, he seemed to be the one who was paying attention to the #RadioWars the least. Â But today, he accomplished less-shitty radio. Â He interviewed an author who is a former Kansas Citian who wrote a scathing indictment of the sports landscape in his former home town. Â Kevin, like he did with my Open Letter, took one auxilliary point in the article and absolutely dissected it, filleted it and left him nearly in tears. Â It was vintage Kietzman and harkened back to what Between the Lines was before the Cookie Diet and the Grilling Segment and What’s Up Leabo segments.

I found myself sitting in my driveway listening to the last 10 minutes – mouth agape.

It accomplished the mission.

Does this change anything? Not really. The hour before, he had a rambling Jim Colbert talk for 30 minutes about the type of grass grown at Colbert Hills. Â It was self-serving and exhausting.

But there was a gleam, men.

It was exciting to listen to and made me long for that type of Sports Talk all the time.

Moving forward, I shall continue to encourage the medium that I love to work harder, be more creative and simply make better radio.

But today was a good start.