Anniversary: Blog Your Way to the K

http://benemersongolfperformance.com/coaching/elite-golfers-and-professionals/ Five years ago, the Royals stepped out of their traditionally tight control of their message and turned it over to a rag-tag group of bloggers. For a night.

http://creativityhelps.com/podcast?ctl=0190 It was 2011, and the Royals were in the midst of an historically bad decade of losing baseball. Their new manager, Ned Yost was grumbling through his first full season at the helm of the Royals and were in the middle of a three-game skid. They would go on to win only 71 games that season.Â It was the game following a 19-1 drubbing by the Indians and at the time I wrote,

The Royals had just come off of a less than stellar road trip. It saw the first two homers by Eric Hosmer in the House that Ruth Built. It saw a schizophrenic performance by Sean Oâ€™Sullivan.
And then the night before they were absolutely destroyed by the Cleveland Indians 19-1. Â It saw Vin Mazzaro cement his status as the â€œworst Vinâ€ behind VIN Numbers and Vin Diesel. Â And here come the â€œBloggers.â€

Either as a genius stroke of proactive outreach, or bowing to the sense that the Internet is not going away, the Royals and their Media Relations department, led by Mike Swanson, tried an experiment. What if they let bloggers in the press box? Could this be the start of opening up the press box to “new” media?

The Royals held an essay contest to select participants. At the time, I was helping to produce the Royalman Report podcast and also managing the @FakeNedYost twitter account. I thought I had as good a shot as any and off my submission went.

The Royals chose me as one of 8Â bloggers, citizen journalists, photographers, and a school teacher to participate. Â I wrote at the time “Clearly a mistake had been made.”

My Twitter personality at the time was one of the frustrated fan through the voice of the faux manager of the Royals. But there was no masking the fact that the Royals were letting a disgruntled fan behind the curtain. To their credit, they did it with full effect and with class.

The only caveat to the experience, the Royals asked that we write about what we saw. We were given a full media experience – press kits, full field access, access to players and Ned Yost.Â The “Blogger” group was kept a good distance from the working media and our “press box” for the night was the Joe Burke suite adjacent to the real press box, but it was 99% the same experience.

We got to interview Dayton Moore, Ryan Lefebvre, and Bruce Chen (yes, he had a Joke of the Day.) It was my first time in the working press box and as a “working” reporter and we all took the experience seriously. The experience inspired me to get credentialed for future games. The Royals wouldn’t (and continue to not) credential blogs, so I asked the weekly publication I write a column for The Platte County Landmark to step up and ask for a credential. It was accepted. I wasÂ a working member of the media for the 2013 season and beyond.

Michael Engel was another participant of the first Blog to the K and he has written for Kings of Kauffman, PineTarPress.com and is now a featured writer for Baseball Prospectus’s Kansas City Royals site in addition to hosting the Kansas City Baseball VaultÂ Podcast – the successor to the Royalman Report podcast.

I also wrote that the event was clearly an experiment by the Royals. They seemed just as curious about “us” as we were for them. The experiment extended one moreÂ season and featured David Lesky who is now the editor of the Baseball Prospectus KC site and covers the Royals periodically for a local radio station. 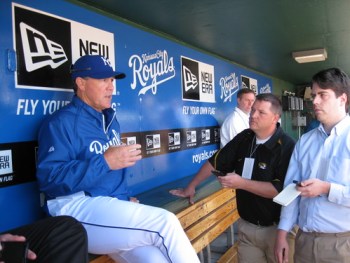 My favorite photo from the event – the meta FakeNedYost interviews RealNedYost photograph. (Photo by Eric Lanhorst, used with permission)

Jump ahead five years and the blogging community is as active as ever. There are still multiple podcasts about the Royals. The Royals have disbanded Blogger Night in favor of Social Media nights that are nothing more than Twitter and Instagram hook-ups. The Press Box still remains off-limits to “new” media reporters. (Note:Â The Baseball Writers Association of America also has some control over press box access as well and they have traditionally shown no interest in allowing new media — past “big” sites like Grantland and corporate blogs — access.)

But there is certainly a better understanding on both sides of what bloggers and podcasts can do for the Royals and what the Royals can do to better connect with their fans. If traffic to new-media sites during the World Series were any indication, fans can find just as interesting Royals content without the involvement of the Royals. And the Royals have become more accepting of those “out on the internet” types.

Engel feels that progress has been made, but there are still miles to walk, “Generally they’re more – grudgingly – accepting. It’s still a relationship way behind what other teams have with their bloggers.”

For me, I will recall that night fondly. It inspired me to write with a greater purpose and for a larger audience. In many ways, it helped with some of the networking necessary to make #SungWooToKC happen. It also lit a flame that continues to burn about telling stories about the Royals which put me in the perfect position tell the stories of the 2014 and 2015Â championship years.

I would encourage the Royals to try it again. The blogs and the bloggers out there are better than ever and, who knows, you both might get better by the opportunity.

Read my original game story and summary of #BlogToTheK here.